This family member is my 5th great-grandfather and comes into the family from my moms line. (Sawrey-Hensley-McGuire)

He was born on December 18, 1732 in Würzweiler, Donnersbergkreis, Rheinland-Pfalz, Germany.
He died on July 23, 1784 in Ft Boonesboro, Madison, Kentucky, United States, he was 51 years old.

Johann Michael Shirley, son of Charles “Carl” and Anna Esther Shirley. None of the known records refers to Michael as Johann except his birth certificate.

Michael was born in Germany December 18, 1732. He migrated to England and later he migrated to Spain (family tradition has a Shirley being sent as an ambassador to Spain and left stranded in Spain when England’s king was overthrown by a brother) before coming to America and landing at Plymouth Rock.

He was a bonded surveyor 1761-1769 in Augusta County, Virginia. Michael enlisted December 1, 1777 in Captain Bentley’s Company, 3rd Virginia Regiment, commanded by Col. John Neville, formally known at times as Captain Reuben Briscoe’s Company and Charles West’s Company and commanded by Col. Heath during the Revolutionary War. Michael’s pay vouches shows that he spent the winter at Valley Forge and the following spring he had pneumonia. His name appears on the company rolls until November 1779.

Michael married Katherine “Katie” Franz/Frantz. Katie lived in what is now Washington D. C. with an Aunt and Uncle. Her mother died shortly after they came to America. Her father returned to Europe with the two younger children to place them with relatives to be cared for and educated. He left Katie with her mother’s brother and wife until he could return to America, The ship was never heard from again and is susposed to have been lost at sea.

While at Washington (D. C.), Michael, as a young soldier, was passing in the line of march, saw Katie and later fell in love with her. Their wedding was opposed, as young Shirley was a “mere solider”. They lived in Washington and then moved to Pennsylvania. Later they moved to Fort Boonesborough and tax records reveals that Michael brought land that was patent by Daniel Boone.

Michael Shirley was shot by Indians at Station Camp, Kentucky. The Indians shot him, breaking both of his legs, and he fell from his horse behind a log. The Indians thinking him dead, left him and capture his horse. He crawled to a tree and from there he dragged himself back and forth to a stream of water. On a vine he cut with a pen knife how he was killed and marked each day he lived and on the sixth day, he said he felt death and as to whether he died that day or lived longer is not known. The family buried him where he was found and his buried place was marked by a stone with M. S. curved on it and the same was cut on the bark of the tree by which he was buried.

Michael Shirley enters 700 acres of land on part of a treasury Warrent No. 7422, Beginning at a black walnut tree with his initials M. S. at the mouth of a creek running into the Kentucky River about three miles below Miller’s Bottom, to run up the creek and down the Kentucky River for Quantity. Entered January 7,. 1783.

Located in front of the rebuilt Fort Boonesborough, Fort Boonesborough Historical State Park, Madison County, Kentucky is a monument that has the names of early pioneers having a connection to the original fort. Michael, his wife Katie and their son Charles names are inscribed on this monument.

Katy died January 23, 1825 in Madison County, Kentucky. Michael and Catherine “Katy” had eight children. One of them was a daughter born February 23, 1762, and they named her Mary Ann Shirley.

Mary Ann Shirley married William McGuire February 23 rd. 1878 in Shenandoah Valley, Rockingham County, Virginia. They were married by Rev. John Alderson. They were my 4th. great grandparents. They had a son and named him Michael after his grandfather.

William was a lieutenant in the Revolutionary War. Mary Ann went him and fought along side him. Many other wives also accompanied their husbands and fought with them and helped them. Daughters of the American Revolution (DAR) state that Mary Ann molded bullets at the Battle of Saratoga in New York.

William and Mary Ann, and their son Michael (called Bennie), were taken prisoner by the British soldiers May 12 th., 1780 at Charleston, Virginia and were taken to Montreal, Quebec in Canada. William was 32 years old, Mary Ann was 18 and Michael was 2. They were held there for two years by the British. August 1, 1781 while still in prison, another son was born to them and they named him Thomas McGuire. (The lineage to me).

On September 16, 1782, William and Mary Ann, and their two sons Michael “Bennie” and Thomas, were placed on a list to be released and returned home. Shortly afterwards they were released, or escaped, the records are not too clear. William, Mary Ann and their two sons were making their way back to Virginia on foot, enduring the brutal Canadian winter. The records state that they wandered through deep snow and faced many hardships. When they were somewhere around the Lake Champlain area they stopped at a graveyard to spend the night. With their scanty blankets they tried to prevent the two children from freezing by lying down between two graves with the children between them. Mary Ann put Thomas, the baby, inside her clothing and buttoned her coat over him. Bennie lay between his parents, but during the night he froze to death. The grieving parents scratched out a shallow grave in the frozen Canadian ground, and with broken hearts they left their little boy there.

After the war William was awarded 200 acres as part payment for his war efforts. (This was common at that time as many other men received land also). They lived in Virginia for a time and then moved to Kentucky. Later they moved to Bedford County, Tennessee. 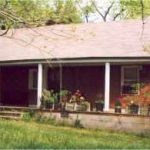 This is the house where Mary Ann and William McGuire, and their children lived in Bedford, County, Tennessee which was still standing when this picture was taken April 22, 2002. It was a log house but the logs have been covered with siding. There were originally two rock fireplaces, one on each end of the house, that have been removed. William and Mary Ann are buried in Horse Mountain Cemetery, which is just a short distance from the house.